The freedom to laugh

www.AwkwardFamilyPhotos.com is one of my favorite websites.  People submit horribly awkward and hilarious images of their families in bad poses and heinous clothes.  “It seemed like a good idea at the time, but WHOA…what were we thinking?!” This is the underlying theme of most of the photos that are published on the site.

Well, about two years ago I emailed a submission to AFP of an awesomely awkward professional family photo we took in the early-to-mid 90s.  On June 1, 2014, I received an email notification that my submission had been published on the site.  I was thrilled.  I totally forgot that I submitted it.  I can’t take credit for the title “White Out” that AWP gave the photo, but I can take credit for the description.  I love that the AFP appropriately named it “White Out” since this was a few years before my sister Morgan joined our family and gave it the little bit of color that we were so desperately missing in the photo. 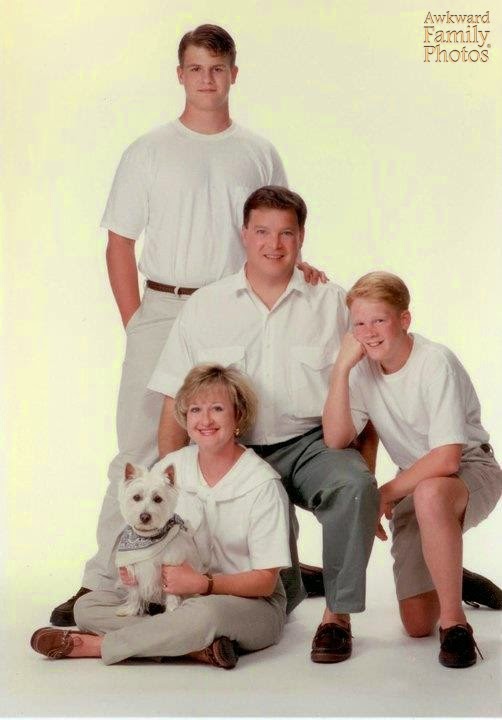 Here is a link to the post. www.awkwardfamilyphotos.com/contests/sanuk/white-out-4
Apparently there is some kind of contest that our photo is a part of…let’s hope we win!
So many funny things have happened and continue to happen surrounding our journey with Simon.  I’ll never forget telling someone before Simon was born that he had Trisomy 13 and that he would not live.  This person mustered up the best response they could give by saying, “What a bummer.”  Another time, Amy went to a store to pick out a few decorations for the birthday party we would have with Simon in the hospital after he was born.  A worker at the store came to assist Amy and pointed to some balloons with images of an infant's hands and feet on them.  She excitedly said to Amy, “These would be perfect for a birthday party!  10 fingers and 10 toes!  How cute!”  Amy just laughed and said, “Thanks, but I think we’re going a different direction,” knowing that Simon had 12 fingers, and (what turned out to be) 11 toes.

I also laugh at some of the things that both Amy and I have uttered over the last several months.
Two of my favorite quotes from Amy include: “You know you are sad when your armpits cry,” and  “I keep tissues everywhere.  And I reuse them.  The one next to the bed is two weeks old.  Holding up surprisingly well.”

Other people who have suffered hardships and trials in their own lives have shared stories of some amazingly difficult times for their families.  These stories, for the most part, often seem to be laced with comedy.  I think of one friend at work who has twin sons.  While still a toddler, one of his sons was diagnosed with a rare form of cancer that nearly killed him.  During this dark time for their family where they were going between chemo treatments and just trying to keep their precious little guy alive, their other son badly broke his leg.  The break was so bad that the poor little guy had to wear a Spica leg cast that covered his hips and his entire leg – nearly completely immobilizing him.  As my friend told me this story, he got red-faced and just began to laugh at the absurdity of it all.  He said, “They had to cut a hole in the cast so we could change his diapers!  Can you believe this?  We have one kid who is barely hanging on, and another who can’t move and requires precision diaper changing!”  In the moment you might be reduced to tears – if not a fit of rage – but many times you’ll look back and see that a situation is so absurdly broken that all you can do is laugh.
If we can’t laugh at the awkward moments of life, even of they occur in the midst of tragedy, it seems to me that we’ve walled-off an entry point into an important part of our character.  When I look in the mirror I see someone who is so far from perfect it could make me want to avoid leaving my house.  What if people see my imperfections?  What if I run into people know my past and have seen some of things I’ve done?

Incidentally, I’m reminded of a specific time while living in San Francisco when I looked in a mirror after getting  home from work.  As I glanced at myself I realized my fly was unzipped.  I immediately started retracing my steps and concluded that it had likely been walking around for a couple of hours with my barn door open. My gut sank when I realized that I had just stepped off of a crowded bus.  A bus so crowded, in fact, that I had to stand up with my arms stretched over my head while hanging onto the handrails.  Oh the poor people that were sitting terrified just praying my boat would stay docked.  Maybe that's how I should see myself.  I mostly have the outward appearance of looking sharp and having it all together, but if you look with a detailed eye you'll see flaws.  When we feel the freedom to laugh at some of our flaws, we open ourselves up to connect with others.  We say, "I'm not perfect and I see the hypocrisy in pretending I am.  You don't have to be perfect to be my friend.  You don't have to be perfect because you have a perfect God, and a perfect Savior already achieved it all on your behalf."