Longing for the City 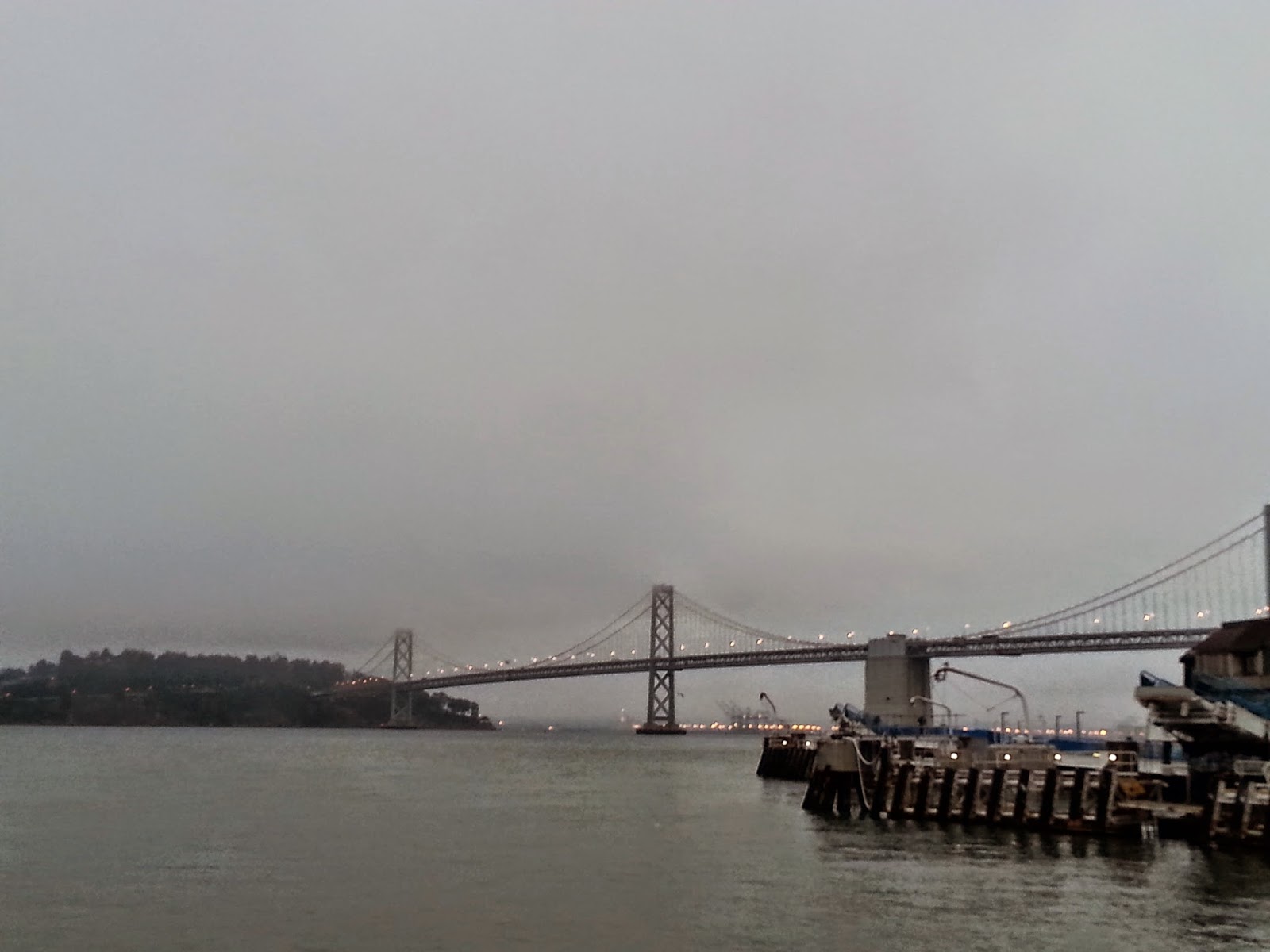 I woke up early this morning (Aug. 15th), determined to set my eyes on the San Francisco Bay.  To come to the City and not see it would just feel wrong to me.  My trip is very condensed.  I’m here for just 24 hours.  I sit on a park bench I’ve sat on many times before, watching the ferries come and go as they shuttle commuters to and from the City.  As I gaze out on the waters that roll beneath the grey, foggy sky I think about why I miss San Francisco.  Certainly I have deep nostalgic longings for my old life here - a time when everything seemed right.  But that’s the funny thing about nostalgia.  Nostalgia clouds your judgement of that past and forces you to remember the good.  I went through some very difficult times early during my tenure in San Francisco.  On the very park bench I sit in now, I had many a phone conversation with my parents where I felt like I was at the end of my rope.  At certain points I was so close to giving up that if my mom or dad would have uttered, “Time to come home, Adam,” I would have gladly tucked my tail between my legs and moped back East down I-80 toward Kansas City.  It would have been so easy to have my parents nurse the “wounds” that my own decisions caused.  I so easily could have been a statistic - a Midwest boy, chewed up and spit out by the Big City in just a few short months.

But I stayed.  I cried.  I was depressed.  I dipped below the 200 lb. mark for the first time since I was 16.  I prayed desperately to God - asking that He would ease the burden of my loneliness.  I read Psalm 40 repeatedly.  I was not active in a Christian community, nor was I accepting of God’s transforming grace.  Loneliness was my only companion.  During that time, my thinking was still framed by some old theology.  I was trying to live on baby food and wondering why I felt so spiritually malnourished.  This old theology was good for a first calling to surrender to Christ, but was not sufficient for growth into a second calling.  I was indifferent, unconfident and inactive in my faith in Christ.  But I was still clinging to the Truth of the Gospel and I drank in the Scripture when I knew nothing else would quench me.

Things got better for me.  My dear old friend from college, Amy Sullivan, came to visit me in early 2007 and that trip ignited passion to get to know one another more deeply.  After a 9-month stint living in Alameda, I moved into San Francisco and started letting roots establish.  Amy ultimately moved to San Francisco to pursue career growth and figure out what “us” looked like.  We were drawn to a Christian faith community, Cornerstone Church.  I started letting go of old ideals that shaped my beliefs of how a Christian acted, spoke and looked a certain way.  God’s unending grace started re-convicting me to surrender to Christ again and again (through daily death to my own will).

For six years, the City became the backdrop for major milestones in my life - flags were planted in low valleys and on high peaks.  Although I’ve been back to SF a few times since we moved over two years ago, I had this tingling feeling in my gut when I laid eyes on the City for the first time yesterday.  This feeling was a longing to re-experience all the good.  All the good times would not have been nearly as sweet without the bad.  As I sit on this park bench, I realize that the best way to retrace memories is to run your fingers over your scars and acknowledge the painful times along with the joyful times.

The Bible tells us that Heaven will be like a grand city - the ultimate city.  As I reflect on my current, short 24-hour visit to San Francisco, I recall seeing an early-40s Chinese man and an older Indian woman having a conversation in English at the airport yesterday.  They were seemingly strangers, speaking in a second language.  They were connecting, getting to know one another and finding common ground.  The nostalgia I have for the City - the longings for the best of times, and for common ground with a large, diverse group of people - is really just the deep longing I have for a restored place.  A perfect city.  A place where the common language is grace and the common ground is Jesus.  A new Heaven.  A new Earth.

Funny side note: I went to one of my favorite delis in the Financial District to grab a breakfast sandwich on my way to my bench by the Bay.  It was 6:30 AM and there was one other customer chatting with the workers behind the counter in the deli - which is normally a bustling, popular food stop. Something came up about one of their favorite bands and how they would be doing a show in Kansas City next month.  The deli worker exclaimed loudly (two times, no less), “My friend is going to fly to Kansas City to watch them!  Why would anyone want to go to Kansas City?!”  If I had walked in the deli five minutes earlier or later, I wouldn’t have gotten to hear her exclaim, “Why would ANYONE go to KANSAS CITY??”  What an amazing sense of humor God has.  Grace was again revealed in a common occurrence of life.