Charles "Honey" Boyd - the most interesting man in MY world 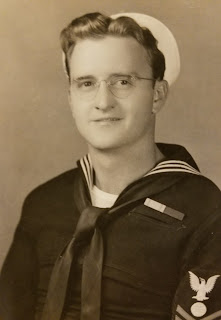 Let me preface this piece by saying that most of these stories are true.  At least, they were presented to me as fact at some point in my life by either my grandfather or my mom.  Like those Dos XX “Most Interesting Man in the World” commercials, there may be some embellishment simply added to make the stories just a little bit better.  But that’s OK, right?  His stories and his presence made him the most interesting man in my world.

My grandpa, Charlie Boyd, was born December 22, 1919, in Chula, Missouri to Margaret and Shelby Boyd.  The Most Interesting Man in MY World had to begin with a more interesting story than just that, didn’t he?  Oh yes.  Legend has it that his loving parents named him “Delbert Eugene Boyd” upon his birth.  The doctor that assisted with baby Delbert’s birth was so horrified by his name that he changed his birth certificate to read “Charles Boyd.”  No middle name included.  At some point, Delbert’s birth certificate was discovered and he started going by his preferred nickname, “Charlie.”  Which was a very wise move considering that his mother had started calling him the much less charming nickname, “Doobus.”  Lucky for him, he received the pretty awesome honorary middle name of “Honey” by one of his best friends from his childhood in Chillicothe, MO, Larry Bowles.  More on Larry later.

Charlie dropped out of school in the 8th grade and began working odd jobs to help his parents provide for their family (including 4 siblings, Raymond, Leland, LeRoy and Shirley).  He would explain to me, when referring to his parents, “They were poor dirt farmers without a pot to piss in.”  One of his main jobs was working for a shoe store, which was likely the place where he fell in love with the retail business.

Charles bravely served during World War II in the United States Navy in the Pacific and was always very proud of that fact. He entered the Navy on January 14, 1941 and served until November 28, 1946.  He remained a student and teacher of World War II history until the day he died.  As one might imagine, Charlie’s entrance into the Navy wasn’t ordinary.  When he went to enlist he either had to prove he had a GED or high school diploma – neither of which he possessed.  He was given some sort of a literacy test by the Navy, which he had to pass, in order to prove he was at least as smart as someone with a high school diploma.  Well, according to Charlie the test came back with a grade of “imbecile!”  He was given a chance to study and retake it in 24 or 48 hours.  Upon retaking it he not only passed, but was given a grade of “genius!”

At the age of 59, Charlie had a heart attack followed by bypass surgery.  He promptly decided it was best to quit smoking.  A few things he would proudly never quit were working hard, Oreos, and eating 1 pound of bacon per week.  The formula seemed to work as he made it to his 97th year without the faintest hint of a lingering heart issue.  He was never hospitalized again until he was 92 when he suffered a bladder issue.

He once told me that Sam Walton toured one of his retail stores in Olathe and was very intrigued by the “big box” concept.  Charlie alluded to the fact that Mr. Walton must have gotten his ideas for Wal-Mart from his innovative new retail strategy.  In other words, “You’re welcome Walton family.”  Charlie was an amazing businessman and entrepreneur – making most of his fortune in the grocery business and real estate.  He was involved in many other businesses including “big box” retail (Gibson’s) as well as bowling alleys. 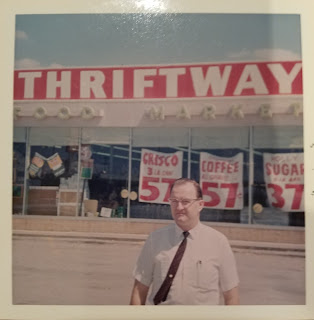 As a kid I was awed by the fact that my grandpa owned bowling alleys.  With arcades.  ARCADES!  I remember feeling incredibly special one time when we showed up to the bowling alley early one day and he flipped a switch that magically turned on all the arcade games – lighting up the dark room like a carnival in the night.  My brother and I had free reign to play whatever we wanted.  As a kid I would think, “He owns this?  Why does he ever go home?!”

Well, when he went home he got to hang out at a house that seemed as big as a castle to me.  He had cable TV channels I had never heard of.  He had a pool table. He had a pond the size of a football field filled with catfish the size of sharks!  I was always a little confused by the full body mount of a deer that he had proudly displayed in his basement near the pool table.  The fact that he had a mount was strange enough as Charlie wasn’t much of an outdoorsman or hunter.  The more strange fact was that the deer was clearly very young and small with white spotted sides.  “Did grandpa kill Bambi?” I would wonder.  He explained to me later that he went on an African Safari and hunt, and this was his trophy from that epic journey.

Grandpa would tell the funniest stories, and had some very strong opinions.  His vocabulary was shaped during his time as a sailor.  He had some of the best and most colorful sayings – many of which I don’t feel totally comfortable writing down here!  One of the ones I heard the most was, “He/she/it is more worthless than chicken sh** on a pump handle!”  So many of these colloquialisms were far from politically correct and came from a time and a place that I, as a (old) millennial, can only try to understand. I certainly did appreciate his no nonsense, straight-shooting approach to life and to relationships.

Unfortunately one of Charlie’s choices created a negative ripple effect through generations of our family.  This was forgiven and overcome, but left some lingering scar tissue.  Both the forgiveness and the pain were evident at his funeral as I talked to my 91-year old grandma, his first wife of nearly 30 years.  Charlie left my grandmother for his second wife, Joan, in the 1970s.  At his military burial ceremony, he was honored for his service with a firing of three “volleys” and a playing of Taps.  An American flag was folded by two current Navy service members, and then presented to my aunt and Charlie’s eldest daughter, Cynthia.  While this was a beautiful and touching moment, I couldn’t help but have a longing for things to be different.  I wished that history could be rewritten and that my sweet grandma was sitting front and center, accepting the flag.

I am reminded that my grandparents’ divorce wasn’t the “end” of the story.  There was redemption and restoration.  Charlie stayed involved in the lives of his four daughters, and he chose to know and to pass wisdom on to each one of his grandchildren.  God bless him for that.  God redeemed the choices my grandfather made by bringing Larry Bowles back into my grandmother’s life after he lost his wife, Dolly, to cancer in the early 1990s.  Dolly was a dear friend of my grandma’s.  Larry became a great source of wisdom and laughter for us all during his marriage to grandma Millie until his death in 2005.  We are so blessed to have our aunts, uncle and cousins from the Bowles clan as part of our family forever.  Like the song says… God truly does make beautiful things out of us…out of dust. 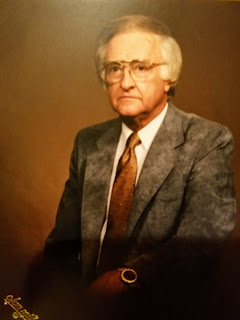 I’m proud of my Grandpa Charlie.  His death leaves a void on this side of Heaven.  But I know death did not have the last word, not for him.  During the funeral Charlie was quoted to have said very recently to my uncle Vinse that, “If you don’t know Jesus, you are out of luck.”  Amen to that.  See you soon GPC.