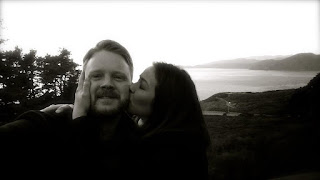 2015 was a year of staggering change for me.  Exactly 12 months ago today (Jan. 1, 2015), we gave goodbye kisses to Teddy after dropping him off at his grandparents house in Saint Charles.  We were going to spend a week in San Francisco and Sonoma.  It was to be a great time of rest, conversation and healing after a heartbreaking and strenuous year in 2014.

Amy and I had much to talk about with regards to my career during our trip to the Bay Area.  I sketched out a pros and cons list on the airplane to help measure the opportunities that were in front of me.  I could stay at the company I had been with for nine years.  This was company I loved and was loyal to since I was a 23-year old, know-nothing peon.  This was a company that had some incredibly supportive and graceful people during our journey with Simon.  This was a BIG company, with plenty of opportunities to grow, but little opportunity for me to have a large impact on its future or help steer the direction it would go.

One of the other opportunities I was given was to join a firm that has prestigious name - one that has been in Kansas City since 1910.  The company was a fraction of the size of my 9-year employer.  It was stable, but had gotten stale.  It had a solid foundation, but there was no blueprint for growth and improvement.  This new opportunity promised responsibility to lead a large team of people.  It would give me a voice, and a chance to impact the direction and culture of the organization.  It would free me to dream, to take risks, to make mistakes, to stretch myself further faster, and to incorporate Biblical wisdom in ways that would serve more people in ways that would take years for me to accomplish at my old firm.

After days (and truly weeks) of deliberation, Amy and I made the choice to embark on a new adventure with a new organization.  I can’t remember exactly, but I think we “cheers’d” the decision with glasses of wine while having an awesome dinner at El Dorado Kitchen in Sonoma.

Something we didn’t do a great job of factoring into the pros and cons list was how much a simple job move would impact our family routines.  My routine completely changed - from small stuff like my lunch options, to big things like a huge demand on my time from multiple people inside and outside my company.  It took several months just to feel like we had settled (somewhat) into a new normal.

As I reflect on almost a year in my new job, the phrase that rises out of the fog in my mind is that “leading is serving.”  I’ve admired leaders and been envious of the position they’re in for years.  I’ve thought, many times, “I could do it better than him/ her.”  I’ve publicly and privately criticized leaders for both the minuscule choices and major decisions they have made.  Now I look back at my previous organizational leaders with regret and empathy in my heart.  I’m so grateful for the time they took to pour wisdom and knowledge into me.

In theory, I have always understood the Biblical concept of Servant Leadership.  But I never had to truly put it into practice in a large way.  I spent a 9-year career making sure I got the attention I deserved.  For 9 years, I needed praise and recognition so someone would deem me worthy of a position of authority.

Now that I find myself in a leadership position, I realize I don’t sit at the top of a pyramid, but instead at the bottom of an inverted pyramid.  I’m last (Matt. 20:16).  It is better to give public attention and praise to someone else than to receive it for myself(Acts 20:35).  If I’m going to help people change their mindset - to help them become more entrepreneurial, more creative, more efficient, more bold, more service-minded, and never complacent - then it is vital that I’m a steadfast example of those traits rather than a domineering coach (1 Peter 5:3).  Now all of my decisions are made with an understanding that they will impact many.  It is a great and tension-filled responsibility to lead.  It really isn’t glamorous and it certainly isn’t easy, but I love the position God has put me in today.  I look forward to the growth and success of our team, and am grateful to have relationships with so many new people.

The biggest and most important change we experienced in 2015 was the addition of our fourth son, Peter Simon Balentine.  Peter’s pregnancy had its challenges.  Amy’s body was tired after being pregnant for essentially three of the last four years.  Although I didn’t feel any physical effects of the pregnancy, it certainly took its toll on me as well.

I wouldn’t say we live in a state of fear, but instead would say we operate with an awareness of the inevitable pain and suffering that happens this side of eternity.  The joy and sadness, and life and death we experienced with Simon and then Thomas have left scars.

During high school, I used to dislocate my shoulder regularly during football games and practice.  My body adjusted to the torn tendon and weakness of the joint by keeping the muscles around my shoulder tense in order to prevent the pain that would come from my arm falling out of place again.  Several times when I would fall asleep, my body and the muscles around my shoulder would relax enough that I would wake up to the agonizing feeling of a shoulder that had slipped out of joint.  It got progressively worse and I finally got shoulder surgery in 2001.  After several years, I finally stopped living in fear of it happening again and my body is forever changed and it has adjusted fairly well.  Scar tissue from the damage, and a 2-inch long scar on my skin remain as life-long reminders of the tension and the pain.

I have had at least one dream that we lost Peter to death.  I’ve woken in the night to his typical baby noises (grunts, whimpers and loud breathing) and begged God that he will make it through the night.  I flinch.  I tense up.  I over-compensate to avoid falling apart.  The wounds have healed, but the scars remain.  This experience affects everything - our faith, our marriage, our parenting, our friendships, our work.  We’re forever changed.

Peter is such a sweet addition to our family.  We love him and his happy, smiling, talking personality that is emerging.  I’m so thankful for him, and also for his big brother Teddy.  Amy continues to amaze me with her patience and grace.  We've been through a lot, but we still love and laugh as much as we can.

Last night, we rang in the New Year in style.  We took both Teddy and Peter over to my parents house and spent the afternoon shopping after we had a delicious lunch.  We had a romantic dinner at a fantastic restaurant and then stayed (kid-less) at a luxurious hotel.  We didn’t stay up until midnight because we wanted to take advantage of the opportunity to get some uninterrupted sleep.

Except… this did NOT happen.  This was the plan for our lovely New Year’s evening, but it didn’t happen!

Peter got sick in the last 48 hours, so we had to cancel our hotel and dinner reservations to stay home and take care of him.  Teddy still went to Mimi and Papa’s house, but Peter stayed with us.  We had time to have lunch and go shopping, but champagne, sleep and romance were replaced with a goopy-eyed baby, a somewhat decent night of sleep, and a Nose Frida.  When it comes to parenting, I’m realizing you can’t get upset when your expectations and/or plans are shattered.  You have to challenge yourself to love your kids without measure, and without ceasing.

I look forward to 2016 as I seek to know Christ better, prioritize Amy and love her better, and be a more worthy example to Teddy and Peter and those I serve.