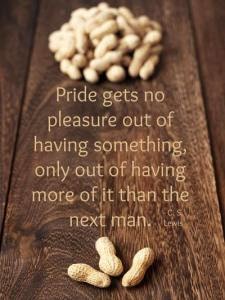 When I work out at the YMCA on Monday, Wednesday and Friday mornings, I typically listen to podcast sermons.  A few weeks ago, I was listening to a sermon on pride that was truly convicting.  Toward the end of the sermon, the preacher said something that made me feel as if a cold bucket of ice water had been dumped on my head.  He said, "If you have been listening to this sermon and have been thinking about someone else the whole time, and how that person needs to fix their issues with pride - guess what - you have a pride problem."  My mind was doing just that up until the moment he held a mirror in front of my face.  I was thinking, I should share this sermon with "him" or "her" so they can start to work on themselves.  I was envisioning people's faces when the pastor described what pride looked like, and I was thinking, "That poor person just doesn't get it.  They're so prideful they can't see past themselves!"  When in fact, I was doing the very thing I was criticizing others for doing.  I was completely avoiding looking inward.  I was too proud to pull back the curtain and find my own naked ego standing there.

I'm admittedly a broken person.  I've struggled and continue to struggle to get past the typical myriad of worldly road blocks: lust, over-indulgence, selfishness, love of money, fear of death, obsession with success, worship of my spouse and children, addiction, and living a dual life.  Many of these vices have fallen by the wayside.  I've shed them from my life by admitting my brokenness, asking for the forgiveness of a loving Father, and then forcing myself to walk in the light.  I only stay in "the light" - and avoid slinking back into the shadows where I can quietly put on my comfortable and dirty old clothes - by making a choice to invite the light to shine on me.  But still, some of the old ways creep back in from time to time.  In the aftermath, in the lonely moments when I sit and wonder how I let myself screw up again, I seek to get to the source of these vices.  How could I let these old ways get the better of me again?  I thought I grew past this!  What keeps me hanging on to this nasty old past?  The answer is pride.

C.S. Lewis wrote one of the most famous texts on pride named, "The Greatest Sin," in his book Mere Christianity.  In it, Lewis speaks about how he has heard plenty of people admit to perpetually struggling with issues similar to the ones I've stated above - addiction, lust, anger, greed and so on - but he notes that he's never heard many people admit to struggling with pride.  Lewis calls pride "the greatest sin" because, "pride leads to every other vice."  Pride is the bullseye at the center of the target.  Pride is in the darkest corner behind addiction, lust, anger and greed where we truly need to shine the light.  If we expose our pride and drag it out into the daylight where it can no longer hide behind the things we struggle with, we can make major progress.  We can experience transformation again by letting God's saving grace enter in and make us new once again.  Exposing pride can be essential for those who might be stagnant in their Christian faith.  This can spur on the second calling you are begging for.  Perhaps you've surrendered and surrendered again, but it still feels like you drag around an anchor that seems to keep you in the same place in your faith.  Perhaps that anchor is pride.  You aren't making the progress that you long for because you never surrendered your pride at the foot of the cross.

The weeds in our flower beds always grow back unless I decide to get some dirt under my finger nails and go deeper beyond the surface where I can get to the roots of the weeds.  Many times I'll just snap off a weed at the surface, and in a few days it comes back with same gusto it had before.  Often I walk by our flower beds and see a weed growing, but I'm too lazy to yank it out.  It might be because I don't want to get my hands dirty, or because I don't want to take the time to stop what I'm doing and focus cleaning up the flower beds.  I'll come back days later to find that the weed has become a vine that is wrapping around our flowers or shrubs.  These flowers and shrubs are plants that we have spent plenty of time and money keeping alive, and the weeds seem to want to choke them out!  Here's the funny thing about weeds: they thrive under neglect.  Simply do nothing, and you'll find that they've overtaken your garden and ruined the beautiful landscaping you've painstakingly built.  Only with focused attention and dirty hands can we combat weeds and give our garden the best opportunity to thrive.

Through much self examination, reading and prayer, I've come to realize that pride is the root of my issues.  The stuff that reveals itself above the surface can be cut off, but it will keep coming back if I don't surrender my pride.

Pride tells me I'm doing fine.  Pride tells me that everyone else struggles with the same things I struggle with, so I shouldn't be so hard on myself.  Pride helps me justify getting away with certain things, because I live a more moral life - a more religious life - than most other people I encounter.  Pride tells me I need to start "focusing on me" to really find happiness, rather than focusing on others to find sustainable joy.  Pride tells me to turn a blind eye to everything that happens East of Troost in Kansas City.  Pride tells me I better come up with a better response for the next time someone asks me where we are going to send our kids to school.  Pride tells me that my employer should start consulting me on how to structure the organization going forward.  Pride says to gossip at every opportunity, and to justify the gossip by saying, "Hey, I'm just telling the truth.  Nothing personal."  Pride convinces me that my troubles are greater than other peoples', and it further motivates me to complain loudly and often so as to remind everyone how my problems trump theirs.  Pride tells me that I have the power to change, not that Christ has the power to change me.  Pride tells me to worry about tomorrow, rather than resting in the truth that Christ gives me sufficient grace for today.

Search me and know me, Father.  Expose prideful ways in me and uproot them.  Drag prideful ways out in the open where they will wither and die in the heat of your light.  Let your Word be my root and prayer be my sustenance.  Let grace transform me again and again.  Amen. (Psalm 139:23-24)